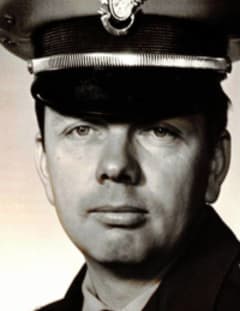 Art was raised in San Jose until he entered the Coast Guard right out of High School in 1962, where he served for four years. Upon discharge from the Coast Guard, he applied to and was accepted into the CHP Academy in August 1966. He was assigned to the Amador office of the CHP as a traffic officer in November 1969. During his time in at the Amador office, he was assigned as the Public Affairs officer, wrote articles for the local papers, appeared weekly on the local radio station, and made public appearances. In 1979 he was promoted to Sargent and assigned to the CHP training academy as the EMT training supervisor. He was briefly transfer to the San Andreas office and then was transferred to CHP Headquarters where he oversaw the Department’s Emergency Planning Division. In July 1991 he was promoted to Lieutenant and assigned to the West Los Angeles Area, subsequently to the San Jose office, Dublin office and the Sonora office. In 1997 he was finally able to return to the Amador office where he served the Lieutenant Commander until his retirement in 2000.
Art was a Master Mason in the Henry Clay Lodge until its close. He then become affiliated with Ione Lodge and Volcano Consolidated Lodge. On November 8, 2022, he was honored with the Golden Veterans aware for 50 years as a Mason. He served as Master of Henry Clay two times. He was also a proud Shriner, working tirelessly on fund raising projects for the Shrine Hospital in Sacramento. Art was a member of the Rotary club of Jackson for over 25 years, serving as president two times.
For the past 10 years, anyone who drove up or down highway 49 any Thursday would see him cleaning up Vista Point, a long-standing Rotary project.

Friends and family are invited to attend a memorial Service at 11:00 AM on Friday, January 6, 2023, at Daneri Mortuary in Jackson, CA. Interment will at the Sacramento Valley National Cemetery in Dixon, CA. at a later date. Contributions can be made in Arliss’s name to Shriner’s Hospital at Share Our Strength, PO Box 715475 Philadelphia, PA 19171-5475