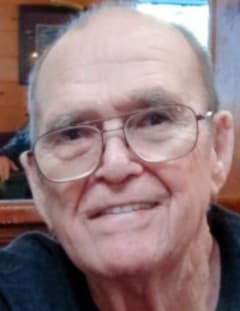 Dale Woodard, a long-time resident of Amador County, passed away on July 2nd 2022 at his home in Fresno, California, surrounded by family and friends.
Dale was born on November 17, 1937 in Los Angeles, California was one of four children (Darlene Brown, Judy Vanhorn, Timothy Woodard) born to Sidney and Lorena (Wiebe). Upon graduating from The Dalles High School (Oregon) in 1955, Dale enlisted in the United States Air Force where he served for three years before being medical discharge in Florida following a plane crash. He returned to California in the early 1960s to drive logging truck for his sister’s family business. It was in Jackson that he met Pat and began their family. Over the years, Dale worked as a journeyman carpenter and built custom cabinets in his spare time. In 1974, Dale became a building inspector for Amador County and later served as Chief Building Official before retiring in 1998.
Dale was known for his love of music, dancing, singing, and playing ukulele. He was also dedicated to serving his community. He was active in Lions Club International, his church and was a volunteer fire fighter in Jackson. It was well known that if anyone needed help, they could always count on Dale Woodard to step up.
Dale is survived by his wife, the love of his life for 56 years, Patricia “Pat” (Carrington); his four children, Cheri Ramsey (Mark), Wayne Woodard (Marianne), Maree Turrell (David †) and Kevin Woodard (Michele); twelve grandsons and eleven great-grandchildren (two more on the way).
Dale Woodard was not a prideful man. It was his love and dedication to his family and friends that will continue to impact the lives of all who knew him.