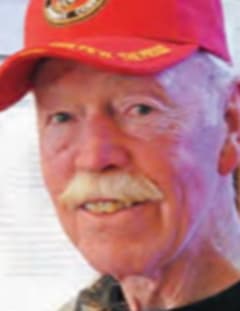 Don Arnold Davis passed away peacefully with family present, on Friday, August 26, 2022 in
his home at the age of 83. He was born on September 13, 1938, in Glendale OR, son of the late Helen Cecil (Sheppard) and Herschel Leroy Davis.
Don Davis was an honorable man. He was a marine who grew up poor, was born in a shack,
and made his way on his own, buying his parents their very first car and eventually owning real
estate of his own here in the Gold Country.
As represented by Brent Parsons in an article honoring Don in the ledger dispatch: “He doesn’t mince words or beat around the bush. If he doesn’t like something or you, he will say so.” He was a wise man, but not the type for school. He knew, however, that school was where the girls were, so after taking two “stupid classes” at a junior college to meet one, he found Nancy Davis and was done. The two love birds were married for 52 years, until her passing in 2013. Once asked by their granddaughter: What is the key to a happy marriage (as they were clearly still enjoying life together)? Both of them replied: “Laughter. You have to be able to laugh together.” And they laughed a lot. The two raised 3 beautiful daughters in Southern California and eventually moved to Sutter Creek as a result of Nancy’s supervisory promotion with Zenith insurance coupled with Don’s love for wheeling and dealing antiques. He had been collecting and trading antiques since childhood; “I started with marbles and comic books and graduated into coins, car parts and cars.” After purchasing a turn of the century kerosene lamp on their Big Bear honeymoon, Nancy “was hooked too.” Their daughters remember every “family vacation” was driving out into the middle of nowhere (ghost towns and high deserts) to literally dig for treasures. Don would then sell his discoveries at swap meets and eventually at his Old West antique store in Sutter Creek. His reputation for being an honest, hardworking, expert in antiques spread and he began managing the sale of people’s antiques and other possessions, running estate sales for their families and the county conservator, after they passed on.
Now it is Don’s time to meet with God and join Nancy once again in love. He is survived by three daughters: Kelly wife of Don Hernandez, Shannon Kessinich and Colleen Friedman; 11
grandchildren and 19 great-grandchildren.
They will hold a celebration for his life at: Sina’s Backroads café in Sutter Creek at 4 PM on
September 17, 2022. All who knew and/or loved Don are welcome.