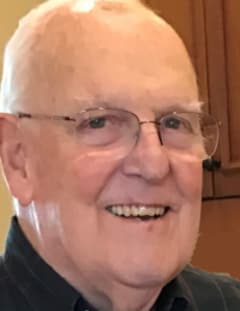 On January 12, 2023, Doug peacefully passed away surrounded by the love and prayers of his family. Born in Oroville, CA on September 1, 1938, Doug was the only son of Jack and Adelaide Fagg.
He grew up in Vacaville, CA and graduated from Vacaville High School (Class of 1956). He attended the University of California, Berkeley (Cal) graduating in 1960. While at Cal, he resided for 4 years at Bowles Hall residence where lifelong friendships began. During his senior year, he met Norva Stuart, a junior at Cal. This was the beginning of their life together. After college Doug served in the US military as an Army officer and was posted to Fort Bliss in El Paso, TX. Norva and Doug were married a year later in Sutter Creek, CA and so began their 61 years of marriage at their first home in El Paso.
Doug began his business career in 1962 with Pacific Telephone in Sacramento. He had a successful career with the phone company in several management roles in many locations. When offered the opportunity to work at the AT&T headquarters in New York City, Doug knew this was temporary and would go “home” to Pacific Bell. This adventure was a cultural change from California. Doug and Norva never wasted a moment of their 3 years living East exploring historical sites and taking their two young children through “another antique shop!”. Later, when living in Southern California and working with Pacific Telephone in Pasadena, Doug became a member of the Tournament of Roses from 1979-1982. Toward the end of his business career, his division of Pacific Telesis was acquired by IBM. Doug worked for IBM in several locations before retiring in Tampa, FL in 1994.
Doug and Norva enjoyed their retirement in Florida with golfing, international travel, and having time for Doug’s numerous hobbies of photography, woodworking, and photoshop. Doug was a volunteer for USAID advising a telecommunications company in Romania for 4 months. Doug’s adventurous spirit took him on a high-elevation trek in Nepal at age 62, one of the oldest hikers on the trails.
Missing their proximity to family in California, Doug and Norva returned to Amador County in 2004 seeking a property on which to build their retirement home. Thus began a new adventure of site planning and new house construction on property near Ione. They continued traveling and throughout their years visited more than 20 countries. In 2009, Doug said, “I have an idea...” and so began the planting of a 500+ olive tree orchard and their new project. However, Doug’s most treasured time was visiting with his six grandchildren and having those special moments with each and following their adventures in life.
Doug is survived by his wife, Norva Stuart Fagg; his loving children, Tyker, husband of Susan Fagg and their children, Caroline, Gwyneth, and Jackson; and Jennifer, wife of David Kral and their children, Mitchell, Lauren, and Rachel.
A celebration of Douglas’ life will be held in the Spring with friends and family.