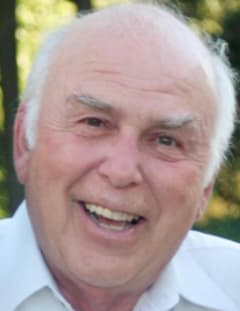 Jack is survived by his wife of 64 years, Ora Runte, and his three daughters; Ora, wife of Michael Emmerich, Jennifer, wife of Scott Poe, and Rachel Runte, as well as his two sons; Kennan, husband of Sandra Runte, and Daniel, husband of Anne Runte, and his daughters-in-law; Julia Ankunding and Carlene Maggio. Jack was preceded in death by his sons, Matthew, and Eric Runte.

Jack graduated from Shorewood High School in Milwaukee, Wisconsin in 1956. He married the love of his life, Ora Kub, on August 9, 1958. He graduated from Marquette University in 1961. Jack became a CPA in Wisconsin, where he worked until he decided to pursue a law degree. In 1969, he and Ora moved with their family of (then) 6 children to Santa Clara, CA, where Jack attended and graduated from Santa Clara University Law School. He worked as an attorney from 1973 until his death.

Jack was a devout Catholic and active in his parish community, St. Katharine Drexel. He was well known for his strong singing voice, particularly during mass, and devoted much of his time and many of his resources to supporting those in need. Jack’s many hobbies included flying his Cessna 210, fishing with his sons, listening to music, and most of all, spending time with his ever-growing family. Jack will be greatly missed and forever remembered by all who knew him.

Services will begin with a Rosary at 9:15 a.m. on Thursday, September 8, 2022, at St. Patrick’s Catholic Church in Jackson, California, followed immediately by a funeral mass at 10:00 a.m. Interment will take place at Jackson Catholic Cemetery.