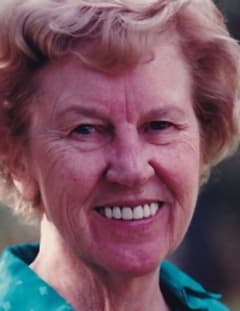 Lucille Marie Morrison passed away on Monday, January 2, 2023, at her home in Jackson, CA. She was 98 years old. Loving family and dear friends were with her at her passing.
Lucille was born on May 3, 1924, to Carl B. Poland and Dorothy L. Kneale Poland who moved from Indiana to Los Angeles, California shortly after their marriage. Along with younger sister, Selena, Lucille’s family traveled back to Indiana to visit family every summer. Lucille stayed in touch with cousins, aunts and uncles and grandparents through letters and occasional visits her whole life. During their childhood, her little sister, Selena, was struck with both polio and scarlet fever. Sitting on the floor outside their bedroom, Lucille would read stories to cheer and console her.
Lucille graduated from Franklin High School in LA, then attended Los Angeles City College. It was through her good college friend Francis Morrison (Brayton) that Lucille met Ken.
“You know we’re going to get married, don’t you?” Kenny told her. Lucille smiled, because of course she knew. They were married August 11, 1945. On their honeymoon, the wartime gas rationing was cancelled, and Lucille and Ken rushed home so they could fill up their tank and immediately took off again to enjoy more time fishing and travelling together.
Lucille and Ken were blessed with two daughters Jeannie and Susie and a little son, Kenny Carl, who passed away only two weeks after he was born. This heartbreak was tough for Lucille and Ken to bear, but they focused on their little family and the enjoyment of time spent together with extended family and friends.
With a love for children, Lucille took Early Childhood Education Classes at Whittier College and Fullerton College. She taught pre-school at Whittier First Presbyterian Church and La Habra Hills Presbyterian Church, and later became the director of the preschool in La Habra for 7 years. She retired when Kenny did, and they moved from Southern California to a new home that they built in Jackson, CA.
Lucille taught Sunday School for many years as well as Vacation Bible School. She served as superintendent for both a number of times. Lucille so enjoyed little children and was a wonderful, encouraging, loving teacher. “And whoever receives one such child in My name, receives Me” Matthew 18:5
Church was always an important part of Lucille’s life. She was baptized at 14 years old.
Lucille loved to sew. She made many of Jeannie and Susie’s dresses as they were growing up. One year she spent many hours sewing doll clothes as a Christmas present for the girls’ new dolls. Another year she set up small dolls with winter costumes she had made so that they looked like Christmas carolers. Lucille was the local resource for countless Raggedy Ann and Raggedy Andy dolls as gifts for little ones.
From 1955 – 1970 Lucille was a Brownie and Girl Scout leader for both of her girls, and then for a third Troup. She was a cookie chairman for the local district.
Lucille had an adventurous spirit and, with Kenny, went camping, fishing, and backpacking in the Sierra Mountains annually. As the girls got older, they joined in the trips. In the LA beach areas, she surf-fished and rafted through the waves. Their first boat in the late 1940’s was a 10-foot rowboat, but it was not their last. She loved boating.
She was a devoted mother, taking her teenaged girls and their friends to Huntington Beach many times and once to the Hollywood Hills in search of the Beatles while they were in town for a Hollywood Bowl performance.
In 1967, she and Ken joined The Vagabundos Del Mar boating group in its organizing phase. They cruised the Sea of Cortez, the Inland Passage Vancouver Island to Juneau Alaska, Lake Powell, across from Long Beach to Catalina Island, from Oxnard to the Channel Islands and the Delta from Sacramento to San Francisco.
Lucille and Ken belonged to and were active in bridge groups, a treasure hunt group, and the Oddfellows Lodge. They joined the Los Angeles 8mm Movie Club, an amateur movie making group in the 1950’s. Both Lucille and Ken were past presidents and they earned dozens of awards for movies that they produced for the club. Lucille demonstrated her acting chops by starring in a Western called The Nugget (Kenny was director). She sewed all of her costumes.
Summers often included a vacation and travel. In 1960 the family flew to Hawaii. Other years there was New York and Canada, Indiana, Wisconsin and other states. Later Lucille saved her money to take a trip with Ken to Great Britain and to the Isle of Man, where they visited an ancestral home and met cousins. Subsequent years they travelled to Australia, New Zealand (visiting Movie Club friends), Fiji and Alaska.
Those who knew Lucille remember her for her beautiful smile, for always having cookies to share, for being in her garden or out on the riding mower, for her dear cards and letters. and for driving through Jackson in her beloved salmon-colored Fiat convertible.
“Life is an adventure with highs and lows. I have been blessed.” Lucille Morrison
Lucille is the wife of Kenneth E. Morrison (deceased), mother of Jeannie Vodden and Susan Bentley (deceased) (Steve), grandmother of four grandsons: David Vodden (Anita), Jim Vodden (Jennifer), Matthew Bentley (deceased) and Timothy Bentley, great grandmother of: Hannah, Eva, Elle, Ethan, Aiden, Natasha, Sasha, Chloe, sister of Selena Lawyer (deceased). She is also survived by nieces, nephews and cousins.
A memorial service will be held on March 4, 2023, at the Creekside Methodist Church in Sutter Creek at 11:00 am. Donations to Creekside Methodist Church, Hospice of Amador and Calaveras County, Amador Stars, or the charity of your choice.