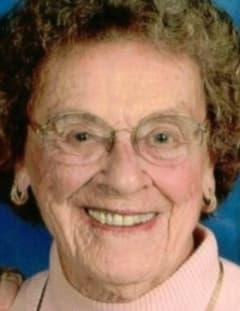 Obituary For Mary A Jones

Mary A Jones passed away Sunday December 18, 2022, in Carmichael, CA at the age of 94.
She was born December 1, 1928, to Richard and Anita Sucich in Richmond, CA. The family moved to Jackson where their 5 children were raised. Mary graduated from Jackson High School. After high school she went to work for the County of Amador.
She married Donald E. Jones on August 28, 194,9 in Jackson, CA. They made their home in Jackson. When her children were born, she became a stay-at-home Mom, this was her job. When the children got older, she went to work for Amador Ledger Print and later Spinco Hardware.
Mary was a member of the 1830 Club, belonged to Our Gang and was a dedicated mother who was always a part of her children’s lives. She loved to garden, play bridge with her girlfriends, sew, bowl, golf and especially loved tennis. Her grandchildren and great-grandchildren were the light of her life.
She is survived by her daughter, Lynette Faddis and her husband, Rodger; daughter, Sharon Parker and her husband, Craig; daughter, Donna Ennis and her husband, Tom; grandchildren, Rodger Faddis Jr, Brad and Amelia Parker, Matthew and Bianca Parker, Meredith Ennis and Colleen and Jeff Fee; great-grandchildren Jessica Faddis, Liam and Milena Parker and Elizabeth Fee. She was preceded in death by her husband, Donald Jones and siblings, Angelina Pivarnik, Ethel Smallfield, Evelyn Piccardo and brother John Sucich, killed in Korea.
A Mass of Christian burial will be celebrated on January 9, 2023, at 10:00 a.m. at St. Patrick’s Catholic Church in Jackson and interment at St Patrick’s Catholic Cemetery in Jackson. Memorial contributions may be made to the City of Jackson, 33 Broadway, Jackson CA 95642 and note “Detert Park Contribution in memory of Mary Jones.”