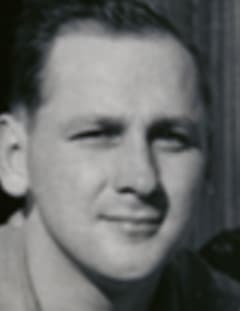 He was born on March 3, 1931, the 9th of 10 children, in Jamestown, Rhode Island to George Caleb Carr and Hope (Higgins) Carr in the family homestead where generations of Carrs were born dating back to the 1690s. He served active duty in the U.S. Army in Korea where he earned a Purple Heart for serious injuries sustained on the battlefield. After the war, he became a printer and worked in the trade in every possible capacity – from pressman to sales to broker – for his entire career.

Perry was a talented storyteller with a prodigious memory for jokes – mostly slightly inappropriate – which he told with a twinkle in his eye and a wry chuckle. A transplant from his native New England to California in the 1950s, his pronunciation of his name, “Perry Caahh”, was the source of lifelong confusion and amusement. In his post-retirement decades, he channeled his storytelling talents into amateur novel-writing, with several riveting but unpublished tomes to his credit.

Perry is preceded in death by his wife of 30 years, Earline (Goodnight) Carr and is survived by his long-time companion, Kathy “Emma” Emehiser, and by his two daughters, Grace Carr Lee and Janet Carr, three grandchildren, three great-grandchildren, two sisters and many nieces and nephews. His family asks that friends and acquaintances honor his memory by raising a glass, telling a bad joke, and remembering him warmly.