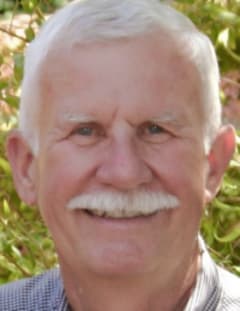 On Wednesday, October 12, 2022, Richard (Dick) Haislet, loving husband and father of two children passed away at the age of 88. Dick was born on August 14, 1934 in Canton, Ohio. He received his Aeronautical Engineering degree from Kent State University in 1956. While attending college, he was active in the ROTC program and worked as an aircraft mechanic. Upon graduation, he served as an aircraft maintenance officer in the US Air Force.

After the military, his young family settled in California where he was employed at Philco Ford and TRW. His job took him to many different countries, where he had countless adventures. In retirement, he continued his adventures with his wife Dot, as they toured and RV’d to destinations near and far. His hobbies included backpacking, restoring vintage automobiles and remodeling houses. His friends called him “toolman” because he could fix anything. He had a special interest in the Kennedy Mine and spent many hours volunteering for the mine.

His greatest passion was his family. He is survived by his loving wife, Dot; his two children and their spouses, Dee (Gary) and Don (Suzanne); his grandchildren, Stephanie, Tim and Casey and his two great-grandchildren.

A celebration of his life will be planned at a later date. In lieu of flowers, family and friends are welcome to donate to any Parkinson’s research organization.